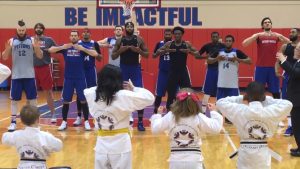 This is a shout out to the Detroit Pistons. At a time when professional athletes are being criticized in record numbers for their off-court conduct, this week I got to see up close and personal some true athletic heroes at the Palace of Auburn Hills.

Imagine what life is like when you’re an eight-year-old fighting cancer. Imagine what a joy it is to be able to get out of the hospital, away from chemotherapy and radiation, away from needles and doctors and nurses– and head out to meet an NBA basketball team. This past week ten children fighting life-threatening diseases were given that chance. They are among the super heroes of Kids Kicking Cancer, an organization that teaches breathing techniques and martial arts to children suffering with diseases many can’t even pronounce. And this week, super heroes met super heroes.

Imagine a child three feet tall standing in front of a 7-foot Detroit Piston teaching those breathing techniques, instructing world class athletes to “breathe in the light and breath out the darkness.” And when the children were done teaching the Pistons their heroic powers, the Pistons returned the favor. They actually lifted some of the tinier children into the air to help them sink baskets and made every effort to make sure each child felt like an athlete.

A hero is defined as “a person admired or idealized for courage, outstanding achievements or noble qualities. “ As President of Kids Kicking Cancer, I’ve spent nearly a decade in awe of the heroic children in our organization who face their illnesses with courage and optimism. These children willingly share their ability to fight pain and discomfort through power breathing with any one willing to listen. The Pistons opened their hearts to these amazing kids this week—proving some athletes do deserve to be called heroes.