The Best Run in a Long Time 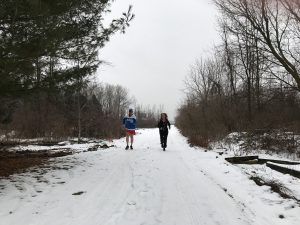 “Wayne Roberts, 68, running for the first time since his hit and run accident.”

There’s a Finnish word “sisu” that roughly translates into guts or perseverance. My new friend Wayne Roberts has that word on his baseball cap and clearly has more sisu than most.
Years ago, Wayne was a smoker, overweight with bad genes. He saw two of his brothers and all of his grandparents die young from heart disease. He knew he was headed down the same path. Wayne decided to make a change. He started running.

On January 1, 1980 he started logging his runs. He ran every day— rain or shine or snow or blizzard for 13,459 days. His plan was to run every day for 50 years. Nothing stopped him. Not a sprained ankle or a two-foot snowfall. Not even a heart attack. When the doctor wanted to put in a stent for his heart, Wayne insisted the doctor insert it through his wrist rather than his groin so he wouldn’t miss a day of running.

Wayne’s wife of 49 years, Sandra, has supported him all along the way. She even sewed an oversized pocket on his running jersey so he could collect returnables strewn on the side of the road Those empty cans and bottles have paid for his running shoes and then some. (What’s the Finnish word for clever.)

Then, in October, Wayne went for a run and didn’t come back. Sandra got a call that he was found bloody and unconscious ln a ditch. Wayne was likely the victim of a hit and run driver but doesn’t remember a thing. He suffered brain damage, a life-threatening blood infection. He was in a coma for weeks. And he wasn’t able to fulfill his dream.

But because this man has what he calls sisu– he’s back on his feet. How privileged I felt this week to join Wayne for his first outdoor run since the accident. It was slow and brief, but Wayne was outside running.
“Thank you for getting me outside for a short jog,” Wayne just emailed me. “It felt fantastic that I could do it again. Thanks for holding me up and keeping me going.”

The truth is, Wayne’s determination and strength will keep me going for a long time. No, he wasn’t able to run every day for 50 years. That dream was hit by a car. But this cross country coach, father and grandfather will serve as an inspiration to so many. And he has a new dream. According to the dozens of log books he’s kept, he’s already run 76,851 miles. He now plans to run his way to 100,000 miles. And knowing Wayne Roberts, he’ll do it. He’s got sisu.

Wayne Roberts is a nominee for Michigan’s 2017 Governor’s Fitness Awards.