How Old is Too Old To Learn To Snowboard? 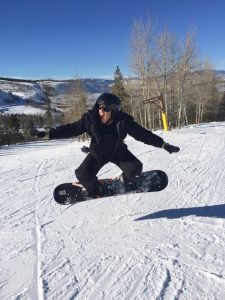 I don’t care what anyone says… You can teach an old dog new tricks. So many people make the mistake of not learning new things— not because they can’t but because they don’t want to do it wrong and look dumb. Learning to live a more adventurous life involves trying things you’ve never done before. You have to be willing to make mistakes, fall, look foolish and not give a damn.

I’ve been skiing most of my life but decided to go to the dark side a few years ago and try snowboarding. While I loved the joy of gliding on two skis, I really relished the idea of testing my ability to learn a new skill. Can you learn to snowboard after 50? Absolutely as long as you have some fitness, are willing to take some falls and can think like a kid. When a child heads out on the slopes they go with an open mind and fewer worries. They’re not so concerned with making mistakes or looking foolish. We adults tend to think too much and over analyze. We don’t want to look bad. (And you’re going to look bad.)

I started slow, took some ridiculous falls, got up and tried again and again and again. Now I LOVE snowboarding and don’t think I’ll ever put skis on again. No there aren’t many senior snowboarders (“grays on trays”) but that makes it all the more special. I was definitely the only 50-something female snowboarder on the slopes today and I’m proud of that.

Children may learn things faster, but, if you’re willing to put in the time, you still can take up a new sport . You don’t have to be perfect. The biggest breakthrough comes when you give up looking good and just go for it.
If you want to make positive changes in your life you have to take some risks. And if you want to try a new sport— throw away the need to look good. See you on the slopes!