Hiking for Health: Fighting Cancer One Step at a Time 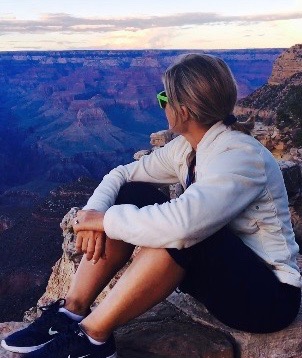 Carrie is a 57-year-old mother of two. She’s an avid hiker who, like me, has traversed this canyon numerous times. She knows the challenge of starting in the middle of the night when it’s just 35 degrees and pitch black outside. This is the 17th time she’s loaded a backpack with 50 ounces of water, enough electrolytes and protein bars to make the crossing and headed down the narrow trail with only the light of a tiny headlamp to guide her down the serpentine switchbacks before the sunrise. She’s well acquainted with the change in altitude, the heat, the dehydration risks, the 10,000-foot elevation change and the 50-degree temperature change. She knows the endurance required to make it from one side to the other and the superhuman motivation necessary to climb back again. The majority of those who hike rim to rim will get a ride or take the shuttle back. Rim to rim is challenging enough. Rim to rim to rim takes a certain amount of insanity.

The Grand Canyon leaves no room for sissies. There’s no opportunity to quit. You can’t call 9-1-1. The moment you hike in, you have to count on your own ability to get yourself out. In truth, the park rangers don’t recommend this hike, especially for those who haven’t trained properly. There are warning signs along the trail reminding those who think this might be fun that the distance, extreme heat and elevation change make it a serious life or death decision.

For years, Carrie has been my rock in this canyon. She has bandaged my blistered feet, made sure I had enough water and nutrition, the right amount of layers, and the right attitude to make it both in and out in one piece. She walks the entire way but knows how I love to run. And as I dash away from her, she’s always warning me to keep my eyes on the trail — one false step and it’s all over.

But so much has happened since the last time she and I made the trek 24 miles across the canyon and back again. In the few years since I climbed this 7th wonder of the world, Carrie’s wonderful world has been turned upside down. She received the diagnosis one in 8 women will hear in their lifetime: Breast cancer.

Carrie’s been through surgery, chemotherapy and radiation. She lost her hair, her breast, several lymph nodes but not an inch of her grit and none of her grace. The moment she was able to bend over and lace up her hiking boots, Carrie was back on the trail. Less than a year after chemo, she was back. Her way of fighting breast cancer was the same method she has always used to cross the canyon: One step at a time. Hiking is Carrie’s passion and she wasn’t letting a diagnosis of breast cancer take that away from her. She remained active which she says helped both physically and emotionally.

She started slow with easier hikes but in short order found her way back in the canyon. Yes there were modifications. She had to find a backpack that wouldn’t irritate any of the muscles impacted by the mastectomy and reconstruction. She gives herself more time than she used to. There’s no hurry. In fact, Carrie says she now is able to stop and savor any given moment in a way she never did before.

And if you ask Carrie, she’ll tell you that hiking has really been key to her recovery. I hike because hiking improves cardiovascular health, lowers blood pressure and reduces the risk for osteoporosis. It improves circulation, energy levels and just makes you feel better. And for Carrie, hiking has been an antidote to the depression and anxiety that come with a cancer diagnosis. And plenty of studies show hiking during and after treatment benefits cancer patients in a multitude of ways from improved fitness to reduced rates of recurrence and a longer life. Cancer patients who exercise have been found to experience less nausea and fatigue. While the chemo may have worked on Carrie’s cancer, it was clear that hiking helped her mind and soul.

But now I was getting worried. She hadn’t responded. Just when I really thought I needed to hike back down and find Carrie, I heard her voice crackle through the walkie-talkie. “I’m just passed Three-Mile Resthouse,” she said. “I’m right behind you.”

Thrilled to hear her voice, I waited impatiently for her to make it up the final and most difficult 3 miles of the hike. I can’t even begin to describe her smile when she finally emerged at the trailhead atop the South Rim. This was more than just another hike. This was a major victory and we both knew it. “I’m not going to lie,” she said breathily. “It wasn’t easy.”

Carrie’s life has changed forever and spending this time with her has changed mine, too. She doesn’t sweat the small stuff anymore. She places a much higher value on experiences than possessions. She doesn’t care if she’s slower, she’s just thrilled to be hiking, at all. The fear of recurrence is always lurking, but Carrie decided early on that she was going to get busy living, not dying. Now she worries less and chooses happiness more. Breast cancer gave Carrie that all important lesson: There’s no time like the present. And there’s no way to feel more alive than hiking the Grand Canyon rim to rim to rim.

My friend Carrie S. Bell has chronicled her journey in a book called “Grit and Grace: Fighting Breast Cancer One Step at a Time.” It’s available in paperback or as an e-book at Amazon.com